I volunteer with the Special Olympics of Allen County pretty regularly.  I have found that my athletes bring me so much joy.  One in particular is K-Man.  K-Man is a great guy…he’s middle aged, sweet as pie, and was one of my favorite athletes to assist during bowling season.  He just cracked me up!

Our routine was as follows (once he stepped in the door of course!):

-Help him put on his bowling shoes

-Then helping him step down to the lane (even though he was perfectly capable of doing it himself) and watching him bowl.

I got to be his cheerleader.  That was pretty spectacular.  He would always ask if he was going to make 100…or if he was half way…always.  Then, he would throw in there “you goweeng to get my boweeng scorr wight?”…to which I would reply…”yes I will help you get your bowling score…but at the end!”….”ok!”  He would always have this big grin on his face and give me these big hugs.

One day he noticed my ring that I wear on my left hand…it wasn’t on my ring finger.  Then that’s where the humor came in…”Arrr you maweed?”, “No (slight chuckle) I’m not married”, “Will you marwee me?”….slight pause….”Someday K-Man, someday.”  He gave me this HUGE hug and just said were getting marweed!  He gave me the biggest kick that day.

What a precious give of grace and perspective.  These athletes–I just cannot explain or express what gifts they have given me!  They are such dolls.  I encourage you to hang out with them sometime.  They will truly change your life! 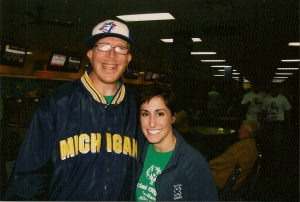