I have a great inside joke with Super Woman!  First of all, I must tell you I can come up with a witty innuendo for anything.  This one just came to me one day as she was discussing inviting a younger male friend to hang poolside with her last summer.  While she was waiting for his arrival, we had a few short minutes to text.

There is a good….let’s say…..10 years difference between the two of them.  I simply told her that it was very “Desperate Housewives” of her to be hanging with him on the sly.  That’s where I mentioned, “I am now changing your friend’s name to the ‘Gardener'” All she could do was laugh and all I could do was just so honestly come up with humorous responses.  I could have just imagined her face turning bright red….trying to hold back completely laughing out loud…and covering up what the REAL reason for laughing was…”Are your flower’s blooming?  Are they in need of a prune?”  I had myself laughing about it too.  Don’t you love to get people to laugh full bellied??  So as this joke now continued…

Super Woman can kick anyones buttocks at 2 things: running any sort of distance and working out.  She is the queen of Boot Camp.  We always laugh about the “cute men” at the gym who make it easy to work out in the same facility.  It makes it bearable in any circumstance for a single female to see a cute guy in front of her on a neighboring treadmill…(thinking to yourself, “that is the prize!  go get him!  If you run harder, you will get to him faster!”)  It is about that time then either one of 3 things happens: 1) you drop your iPod,  2) trip and fly off the treadmill (this is usually what happens to me), OR 3) fake an asthma attack because you are done running hard.  OK or the 4th situation, where you get a bloody wedgie while running.  That is really comfortable and sexy!!  NOT. (Please read manual on “How NOT to pick up Men at the Gym”, page 309, paragraph 2)

One cute guy at her gym, for name’s sake, we just call him the Pool Boy.  The cabana boy that just makes it a little sweeter sweating a little more.  He is an instructor and friend of Super Woman.  If you would see him, you would totally understand!  Needless to say, neither one of these individuals could be considered a love interest; however each of them provide hours of giggling, beginning of inside jokes, as well as have our undivided attention.  While both the Gardener and Pool Boy are very ‘serious’ individuals, we are not.  We can’t be.  Super Woman and I could probably entertain each other with our goof ball comments and support for hours upon hours!  I am so grateful to have a friend like that.

I think humor sometimes is the best way to lighten the mood up down and around life’s woes.  It is a natural coping mechanism to which can allow one to laugh the misery off and find something to be grateful for when they are feeling down.  The Gardner and the Pool Boy are just a teeny-weeny thing we did to create some humor in our lives aside from the very realization that being a single woman now in this transitional part of our life kind of sucks.  I am glad to be going thru it though.  Maybe I will never be tamed! I am me and I have accepted/laughed at it.  I am comfortable and OK with that.  🙂

One thing we have decided, this must be a world-wide epidemic too, that finding real men our age willing to step up to the plate ready to take a try are few and far between!  It is not just city-wide or the place where you are at right now.  It is everywhere!  It is a true epidemic.  Sure the Gardener and the Pool Boy are nice, but it would be nice to have a “Stand By Me” man who was willing to go thru the ups-and-downs of life with you too.  I would at least like to have a “melt moment” once in a while…is that too much to ask??

Earlier in the day, I felt my late Grandma Carolyn around me.  She and I were best buds.  We would do everything together when I was a child.  We would have silly funny things happen to us all the time.  There are situations where you laugh and say…hmmm….only something that would happen to us!  This is where a lot of my self amusement happens to come from and I am really glad I can laugh about it!  Ironically, I was just laughing about her funeral the other day.  That is for another day as that would be too much amusement for one post….anyways….

My Aunt Mary and Gram helped me pick out an outfit.  I about died laughing because my outfit was so very perfect for this night.  Black leggings, black ballerina flats, and a sparkly little number as my top.  If you could imagine it:  every color sequins on the front of this outfit and it went down like a formfitting knit dress.  The sequins was only on the front of the dress and covered my shoulders to the bottom of the dress.  Immediately both my Aunt Mary and Gram said that was it!  So now my outfit was all set…now on to the hair and make-up!

Make-up was done in a few minutes then it was on to my hair.  I curled the whole thing.  I just got finished with my curls when I was trying to hurry and straighten my bangs.  I was running late per usual as I was working and doing things up until the time I absolutely had to leave.  So that is part of the reason I felt already over the place.  Well I started to try to clip the heaviest part of my bangs up so that way I could get the under layers.  The clip I was using snapped and flew across my bathroom behind my back and into the toilet.  What are the odds?  I didn’t even have to turn around because I knew right when I heard the “bloop!”  I simply shake my head.  I reach in and get it.  Disgusting, right? But I just kind of sucked it up and laughed.  It really was funny.  Totally something that would happen to me.  So I decide, skip the clip and press on…”how many more minutes left??  Oh crap 5 minutes!!”

I run out, spray myself with perfume and it was out the door.  I was meeting my family out before hand for dinner.  Now I just wanted to just point out that everyone in my family was dressed nicely except they weren’t dressed to meet the Queen!  They were in jeans and nice tops AND then there was me!  HA.  So we all pile in the car and head to the Coliseum.  We won’t go there with the humor of the ride…that is also meant for another post as well…..

When we arrive, traffic was not terrible although we were 2 hours early!  As we were walking up to the door I was approached by one of our local news stations…”I couldn’t help but notice you look like you might be seeing Elton John this evening… (you think??) …Would you mind if I got an interview?”  I was laughing so hard.  1st of all, I did agree and just as I did that everyone else in my party flew out of the picture!  Ironic part of this is that my Grandma Carolyn always told me that I needed to be on camera and that I reminded her of Katie Couric.  I just laughed and after this brief interview.  The interview can be seen at: http://fortwaynehomepage.net/fulltext/?nxd_id=60062 (I am there about 1:20).  I called Aunt Mary and Gram and told them both to watch the news to see if my face made it there.  Low and behold I was on TV and not in a cheer uniform!  Not used to that!  It was really funny though.

The only thing that this compared to, as far as excitement goes, is going to Disney for the very first time.  My eyes started to water, my heart started beating faster, and I was just so anxious to see him play! 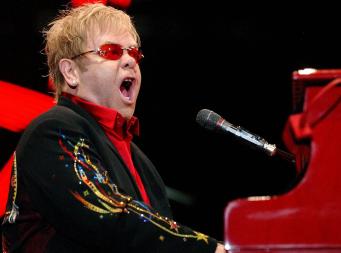 Needless to say, all of my expectations were met and improved!  The concert itself was phenomenal.  It was great and I will tell you if there is any moment where you can see him or he is passing through your town, just buy a ticket!  We were sitting in the nose bleeds, but it was just fine.  Sat with our beer in hand, singing a long, and it was an absolutely amazing performance.  Only thing that could have been better if Drunk Suzy in front of us would have stopped “trying to dance” and just enjoyed the show too!  Hey can’t win them all and she was having fun!

Would it not have figured that I had to go to the bathroom during “Tiny Dancer”?  Yeah just again my luck.  On my way back, there was only a woman following me out of the bathroom when I just started dancing down the hall drunk off my one beer and excitement!  She totally understood and egged it on!

AND this is why this Queen is my FAVORITE Queen.  He sounded and looked good.  He had a very classy outfit and played for 3 straight hours ending with “Circle of Life”.  He didn’t shove any political, social whatever in your face as it was all about music.  Precious and wonderful music.  I think the only thing better would be if Billy Joel was touring with him still.  I really think that would have totally blown this concert experience’s roof off.  I have a new found respect for my favorite Queen.  I came out of there feeling like a Rocket Man…

Enjoyed family time, got dressed up, was on the news, had a great time, but next time I want to meet the Queen….who do I put this request in with??  Anyone know?!